How Connico Helped Me Find My Wings 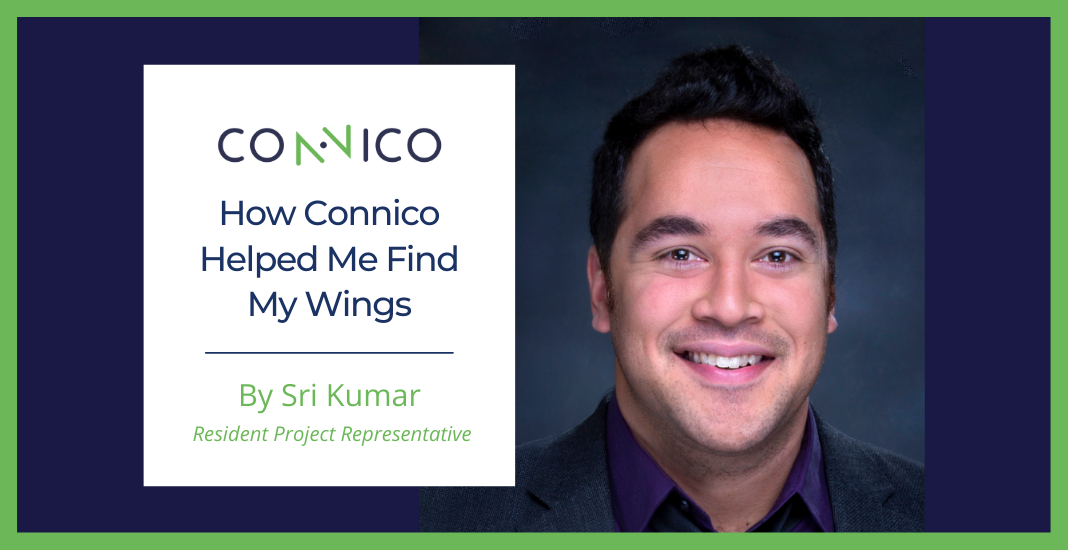 Late one Wednesday last month, on the ten-year anniversary of my start at Connico, I connected into Detroit on a work trip. I always grab a window seat if one is available, and this segment was no exception.

I was born and raised in Michigan, moving away in 2014, so gazing out at the ground below piqued my curiosity about what had changed since I’d been gone. As landmarks became recognizable, it suddenly dawned on me that we were about to touch down on RWY 4R – the very span of concrete that started my career.

Coming down on short final, I could see the Marriott where I signed my Connico hiring paperwork. I had recently graduated from Michigan State, and Connico had asked me to support a multi-year runway reconstruction program at Detroit Metro Airport (DTW). The company had no permanent Detroit office, so my boss got me onto the airfield, introduced me to the project engineer and promptly hit the road back to Connico’s Cincinnati office. My official onboarding lasted about an hour!

Some people in my situation may have expected more attention on their first day or might have panicked with uncertainty. Instead, it dawned on me that Connico and its leaders were trusting me with a huge responsibility – to learn, adapt and do my job supporting this massive project. The airport, our client and Connico’s reputation relied on my efforts. My new boss driving away after my onboarding didn’t send a message that Connico didn’t need me; instead, it sent a message that right from the very first hour of my very first day, they believed in me.

Not only did they trust me, but they also left me in very capable hands. The project I walked onto was the realignment of RWY 4R’s adjacent TWY Z, and it was one of the first pieces in what was, unbeknownst to me, a very complex phased reconstruction of almost the entire airfield. The engineer put me to work right away, explaining the importance of what we were doing and giving me insight into the big picture. I was constantly encouraged to ask questions, and they were always answered – even if I didn’t like the response!

Read the manual…all of it.

The onsite Resident Project Representative (RPR) on the job was very knowledgeable. He took a hard line on the FAA spec and had a demanding control over the job as a result. He insisted that I read the construction Advisory Circular (150/5370-10F at that time) cover to cover and refused to explain why until I finished the entire thing. I printed it out (paper was still in use at that time) into a massive three-ring binder and lugged it back and forth every day to the job.

Fanning through every page of that document, trying to understand the vagaries of every different construction material and process with no prior knowledge, was frustrating and wearing. But it is possibly the best thing I have ever done during the course of my career.

Even today, I cannot do my job without an intimate understanding of that document. By insisting I gain a complete grasp of the fundamentals on my own, that RPR gave me an understanding of what makes airfield construction work. Seven years later, I was able to become an RPR myself because of the knowledge I had gained in this endeavor.

Back in the present, where I’ve deplaned and stand looking down the length of Concourse A, I reflect on how this used to be MY airport. Well before the iconic red tram, I was a kid in a family of four whose only outlet to the rest of the world was one bustling building at DTW. Now, standing at the South Station, I realize that after a decade of visiting and working with airports, I don’t belong to just one anymore. Connico gave me the opportunity to represent the company across the country, from tiny airports to huge ones. They gave me the chance to do it independently, but they never had me do it alone: I always had the support and resources of the whole company behind me.

As we board the next plane and begin to taxi, it looks like our departure runway is 21R-3L – a runway that Connico worked on, but I didn’t get to build. Instead of being disappointed by this thought, it fills me with optimism. Connico has shown a commitment to giving all its young staff a chance to go out and get their boots dirty. They’ve let me see about a hundred different projects at different airports during my time here, and there’s another project somewhere out there that they’re going to add my name to. Even though I miss what I used to do, Connico consistently gives me new opportunities to tackle different challenges.

The A-319 pulls onto the piano bars, and as we turn, I can see that there are three other aircraft queued behind us. Ten years ago, I was standing right on this same airfield, waiting in line for my own chance to get on the runway. But now, we’ve got other people in our company, and in our industry, who deserve the chance to fly. They might be green, inquisitive, and obsessed with Tik Tok, but my mission from here is to help them find their wings, the same way those folks did for me when I was that kid a decade ago.

Sri Kumar is a Resident Project Representative at Connico. 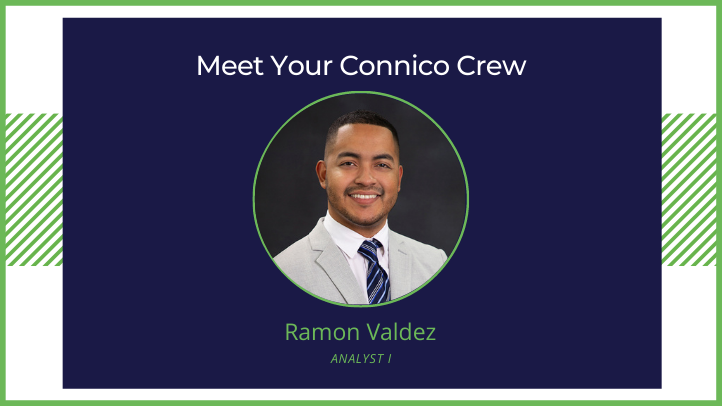 Our latest spotlight is on Ramon Valdez, Analyst I, who has worked in the industry for 8 years. Read on to learn why Ram… 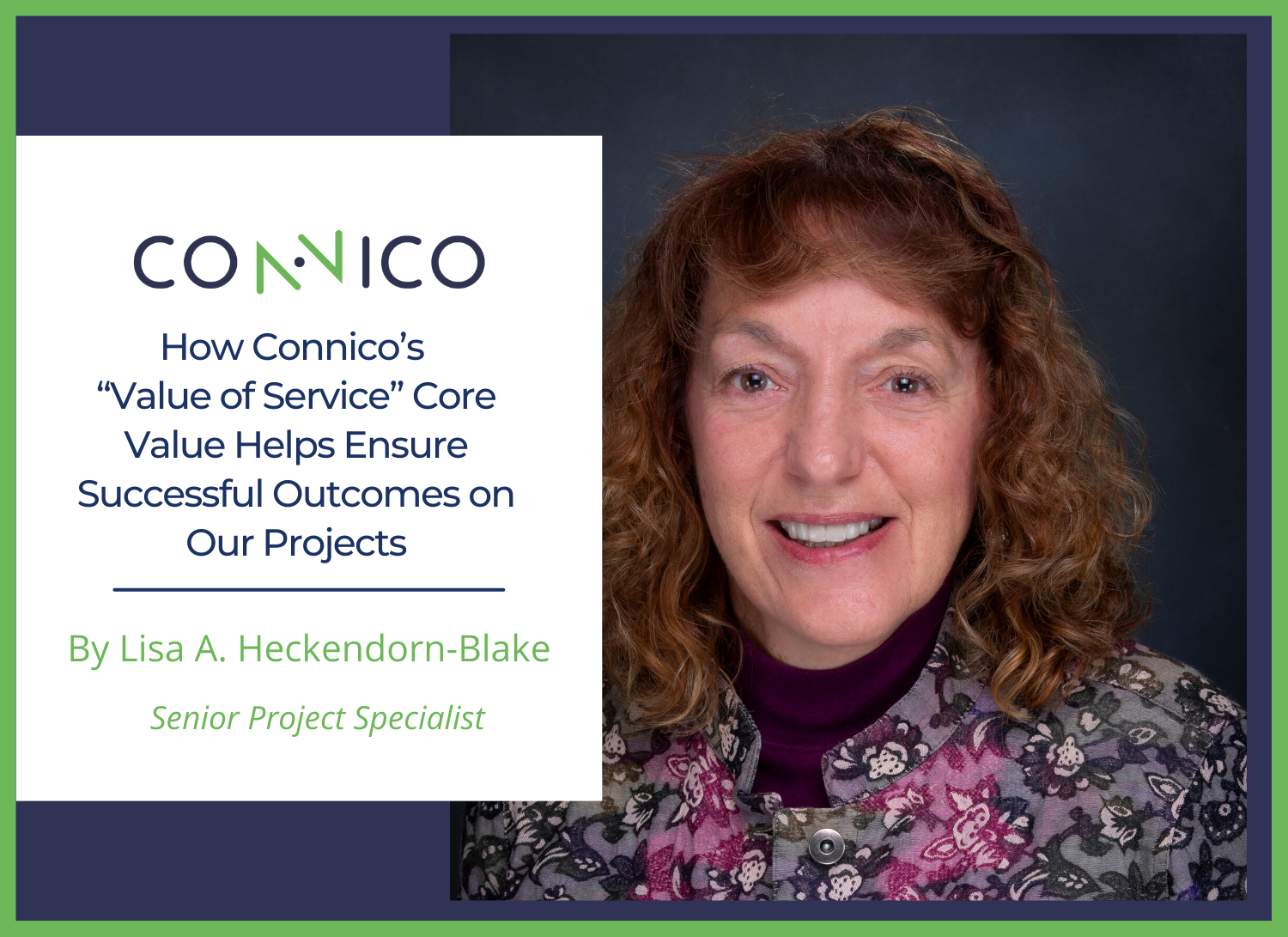 Lisa A. Heckendorn-Blake, a Senior Project Specialist, touches on her 38 years of experience and how Connico's “Value of…